Since 1950 India had expanded its farm lands by 35% and its yields per acre by roughly the same percentage by the 1960s. Its total grain production soared ,78% compared with 64% in the industrial nations. Then bad weather started to plague so much of the India’s (and the world's) crop land that many experts conclude that the climate itself is changing. Harsh winters, droughts or typhoons cut output in India (along with other countries). In Southeast Asia (and parts of Africa) the peanut crop providing mainly animal feed and cooking oil fell far below normal. The main cause of the increase in food demand was the population explosion in India. Merely to meet the added demand of increased population and rising living standards yields should have increased. But India’s food output dropped for the first time in 20 years due to weather changes, population explosion and bad harvests. India lived a "ship-to-mouth" existence, subsisting on foodgrains imported from the U.S. Too many mouths, ever more pregnancies, and the farmers grew the same crops. 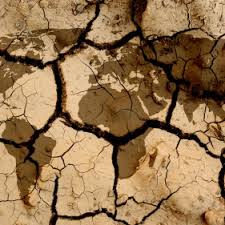 India's agricultural growth strategy after independence evolved over three distinct phases. In the first phase, roughly covering the period through the Second Five-Year Plan, agricultural growth rested on removing basic socio-economic constraints through land reform, change in the village power structure, reorganization of the rural poor into cooperatives, and better citizen participation in planning. The initial assumption was to change the land tenure system by abolishing the zamindar system--a method of revenue collecting and landholding developed during the Mughal and British colonial periods--to stimulate agricultural output. But instead, outputs went considerably down.

The heart of the problem was the inability of India to expand food production quickly enough to keep up with a population that is increasing at the rate of 10 million a year. For each of the three years from 1961 to 1964, total food output has fallen below the 1960 level of 81 million tons, and even in the case of the improved rice crop, deliveries to consumers were off by more than 16%, owing to merchant hoarding and an inefficient marketing system.

Deep Discontent. The impact of steadily soaring prices of rice and grain, India's staples, as well as those of vegetables, eggs and cooking oil, was felt hardest by the urban dwellers, who made up 18% of the population. A man and his wife, both employees of the Kerala state government, who earn well above India's average, those days were forced to halve the family's milk consumption, cut out eggs entirely, and stretch the supply of rice by eating it in the form of soupy gruel. A Calcutta school teacher, gave his children two meals a day, but could afford to eat only once daily himself. Worse off still was the hapless Bombay textile mill worker, who used to overspend monthly and made up his deficit by borrowing from money lenders at 9%.

The discontent of such people had led the government to predict widespread food riots. The then Food Minister C. Subramaniam blamed hoarding by wholesalers for much of the trouble, declared that some merchants had actually bribed railwaymen to slow down food trains so that temporary scarcities will force prices up in some critical areas, permitting them to make a killing.

The second phase occurred during the Third Five-Year Plan (FY 1961-65): The continued shortages of food in the 1960s and the consequent crises convinced planners that raising agricultural output, especially food grains, was essential for political stability and independence from foreign food aid. Self-sufficiency in food-grain production and development of an adequate buffer stock through procurement became clearly defined goals in the mid 1960s. Keeping in mind the variety of socio-economic and agro-climatic differences, the government adopted an area-specific approach, and emphasized programs such as the Intensive Area Agricultural Programme and the Intensive Agricultural District Programme.

New Competitors. India's government had already intervened substantially. In April, "food zones," intended to confine the marketing of wheat and rice within certain organized areas, were initiated on Delhi's orders; they had not worked because, said the wholesalers, the zones merely disrupted the normal patterns of trade. Next the government actually went into competition with rice merchants by establishing a state trading corporation that bought up huge portions of the crop, sell them at "fair" prices directly to retail outlets. Such bureaucratic tinkering would not get at the root of the problem: the need was to raise agricultural yields through modern methods.

The third phase was identified predominantly as the Green Revolution. The U.S.'s Ford Foundation and the Agency for International Development (AID) began pilot programs designed to teach farmers better techniques. These programs increased production dramatically in several small areas, chiefly through the use of fertilizer, improved seed, pesticides, credit and better implements. But it may take years before such programs can have national impact in a country that doggedly resists change.

The ever increasing population of India and several other causes led to a severe food scarcity in India. As a result, the government was forced to import food grains from foreign countries. To increase food security, the government had to drastically increase the production of food in India. “Importing food was like importing unemployment. Seventy percent of our people were employed in agriculture but we were supporting farmers in other countries,” recalls Dr. M.S. Swaminathan. The condition in India did not improve and we had to face other consequences.