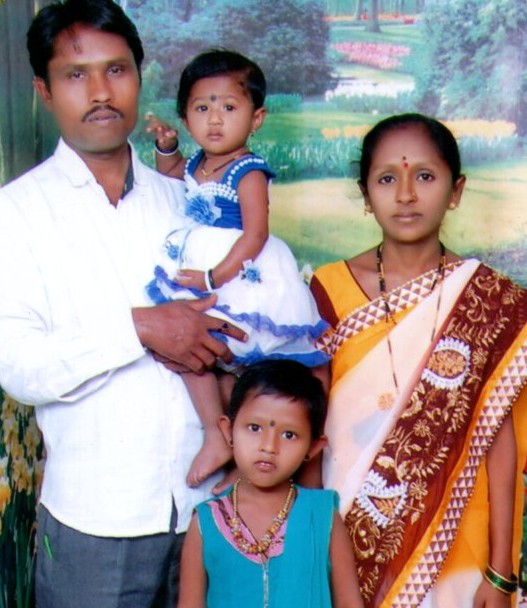 Anil and Manisha, both natives of Mumbai were married and leading their lives in the day to day hustle of the city. Few year later, Pradhnya, a little baby girl entered their lives.

After few months of birth, the mother observed that the baby would cry a lot and not sleep well at night.  They took the baby to a doctor at a government hospital. The on duty doctor found her pale and week and advised her for thalassemia test. Unfortunately for the family it was confirmed that the child had thalassemia major.

The struggles started thereafter. It was difficult for the father to take her along for blood transfusions every 3 weeks as it meant absence from work. Anil’s employer realized the difficulties faced by the family and was kind enough to provide a half day off work for every blood transfusion with no effect on compensation.

Four years later when the family conceived again, they underwent necessary prenatal tests and found that foetus was not thalassemia major. The family had received advise from several sources on the importance of pre natal tests . Despite their financial struggles, they were keen to see that their next child isn’t born with the same burden. Swarali, Pradhnya’s sibling was born.

After another 2 years they heard about  Bone Marrow Transplant process which is a permanent cure from thalassemia. They were made to understand that HLA typing is necessary to confirm if Swarali and Pradhnya have a match. However, the cost of HLA matching was beyond their reach. Several months later, a free HLA typing camp was organised by Sankalp India Foundation. They registered their children with the hope of finding a match and ensured that they came on time to give the sample for tests. When the HLA report came in and the news of the match reached the family, it was a moment of truth for them. The dream of permanent cure for Pradhnya looked plausible.

The cost of the transplant was  beyond their reach. It was impossible for Anil who was working as a office boy in a private firm  to raise the amount for BMT which was around 9 lakhs. The team at Sankalp pitched in and counseled the family that funds can be raised through philanthrophic contributions and that the family could focus on preparing the child for transplant. In the meanwhile, Anil lost his job as the firm where he was working shut down. Anil then chose to be a driver with Uber. As Pradhnya was nearly ready  the family reached Bangalore for transplant. There it was seen that Swarali was underweight and not yet in shape to donate her cells. The transplant was now even further away.

After months of downstaging at Mumbai and regular follow up at Wadia Hospital, Mumbai, Pradhnya and Swarali were both ready. Pradhnya’s family were relieved when they were informed that in Sep 2017 their chance for admission had come up.

By then Sankalp had setup it’s 2nd BMT unit at CIMS, Ahmedabad. It was easy and convenient for the family to come to Ahmedabad. Things fell in place and Pradhnya underwent transplant in September.

Pradhnya’s story, like the one of every other child who has undergone transplant is one of courage. Pradhnya now will lead a life free of the burden.