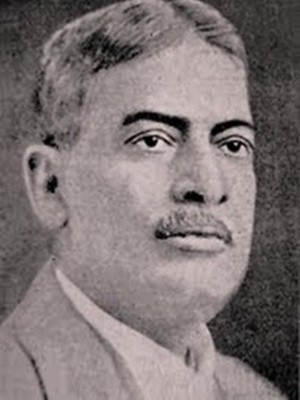 Rai Bahadur Sir Upendranath Brahmachari was a renowned Indian scientist and a prominent medical practitioner of his era. He had a remarkable personality and his most outstanding research contribution was the discovery of Urea Stibamine, an organic antimonial compound, which played a vital role in the treatment of Kala-azar  (a Hindi term for black fever), a protozoal infection. His “Treatise on Kala-azar” is a premier work on the subject .

Kala-azar is an infectious disease of South Asian and Mediterranean countries.The disease is transmitted by sand flies and it is characterised by an enlarged spleen and liver, irregular fever, anemia etc. Though various forms of treatment were in vogue but they did not help to reduce the death rate. Doctors across the world invented methods to treat this disease. Prominent among them was the intra-venous administration of tartar emetic (potassium salt of antimonyl tartrate) Brahmachari decided to improve the results by use of alternative strategies so that the disadvantages could be nullified. He tried many techniques only to realize over time that all of them had significant disadvantages as well. Towards the end of 1919 Brahmachari received a grant from the Indian Research Fund Association for conducting further research into the treatment of the disease. He carried out his research work in a small ill-equipped room in the Campbell Hospital with limited resources available at his disposal. Working under such adverse conditions Brahmachari discovered a potent agent against Kala-azar, which he named Urea Stibamine.

Urea Stibamine was a great success in treating Kalaazar. In 1932, Col. H. E. Short, Director, Kala-azar Commission, appointed by the Government of India stated: “We found Urea Stibamine an eminently safe and reliable drug and in seven years we treated some thousands of cases of Kala-azar and saw thousands more treated in treatment centers. The acute fulminating type characteristic of the peak period of an epidemic responds to treatment extraordinarily promptly and with an almost dramatic cessation of fever, diminution in the size of spleen and return to normal condition of health.” Today the incidence of Kala-azar has drastically reduced in India and other parts of the world. There are occasional or sporadic cases here and there. Today Kalaazar persists only in very poor and remote areas.

His discovery led to the saving of millions of lives in India, particularly in the erstwhile province of Assam, where several villages were completely depopulated by the devastating disease. The achievement of Brahmachari was a milestone in successful application of science in medical treatment in the years before arrival of antibiotics, when there were few specific drugs, except quinine for malaria, iron for anaemia, digitalis for heart diseases and arsenic for syphilis. All other ailments were treated symptomatically by palliative methods. Urea Stibamine was thus a significant addition to the arsenal of specific medicines

Brahmachari started his career as a doctor under Sir Gerald Bomford (1851-1915) in Calcutta. Bomford recognised Brahmachari’s talent and offered the then 27 year old Brahmachari a teaching position in Physiology in Dacca Medical School in November 1901. In 1923, he joined as Additional Physician in the Medical College Hospital. He retired from the Government service as a Physician in 1927. After retirement from the Government service Brahmachari joined the Carmichael Medical College as Professor of Tropical Diseases.

He also served the National Medical Institute as In-charge of its Tropical Disease Wing. He was also the Head of the Department of Biochemistry and Honorary Professor of Biochemistry at the University College of Science, Calcutta.

During the years of his service and even after retirement, he remained actively connected to various spheres in the University of Kolkata. He was associated with almost all the known scientific and literary organizations at Kolkata and took a keen interest in humanitarian and cultural activities.

"As a matter of the most vital concern in nation-building, the problem of nutrition demands very careful consideration by statesmen and scientists alike, more so due to the fact, as has been recently observed, that a great part of the world’s population is not consuming the necessary food stuff. An eminent Swiss authority predicts the decay of civilization unless there is a fundamental revision of the people’s diet."
- Upendra Nath Brahmachari in his General Presidential address to the Indian Science Congress (1936).

He also played a significant role in the formation of the world’s second Blood Bank at Kolkata. Designated as the Chairman of the Blood Transfusion Service of Bengal, he was the Vice President of the St. John Ambulance Association of the Bengal branch and also it's President. He was the first Indian to become the Chairman of the Managing Body of the Indian Red Cross Society of the Bengal Branch. He generously contributed to the High School in Purbasthali (in Bardhaman district) near his ancestral house. He was the founder of Brahmachari Research Institute which became successful in the fields of both research and manufacture of medicine.