Do you know the person who stated this? That’s Baba Amte. He meant to help the needy to help themselves…,He was the one who created a different world for leprosy patients and taught a new approach to see them.

Muralidhar Devdas Amte was born on December 26, 1914 in Hinganghat, Wardha district in Maharashtra state of India. As the eldest son of a wealthy Brahmin landowner, Murlidhar had an idyllic childhood. He developed a special interest in cinema, wrote reviews for the film magazine The Picture Goer and even corresponded with Greta Garbo and Norma Shearer. (Norma Shearer would become one of his first foreign donors when he began working with leprosy patients.., And Amte did not appreciate the restrictions that prevented him from playing with the 'low-caste' servants' children.

During the college holidays, Baba traveled all over India. He visited Shantiniketan, initially attracted by Rabindranath Tagore's music and poetry. Shantiniketan, located amid lush natural beauty, was a microcosm of Tagore's ideal world - here was a community united in joy, work and love. Baba came away deeply touched and somehow altered for life. Closer to home, at Sewagram (Gandhiji's ashram) near Wardha, Baba was equally fascinated with Gandhi's relationship with God. Simultaneously, he was deeply impressed by what he saw as Gandhi's scientific attitude to life. For Bapu's ideals were never some personal fetish but the rational basis for finding solutions to the problems of life. So Baba set about changing what he could. Harijans (also known as untouchables) on his family's lands had always walked a long distance to collect water because the village well was forbidden to them. Baba defied the bitter opposition of the upper-caste villagers and opened up the well to all people. During the Quit India movement, in 1942, he organized lawyers to take up the defense of the jailed leaders and was himself thrown into prison. 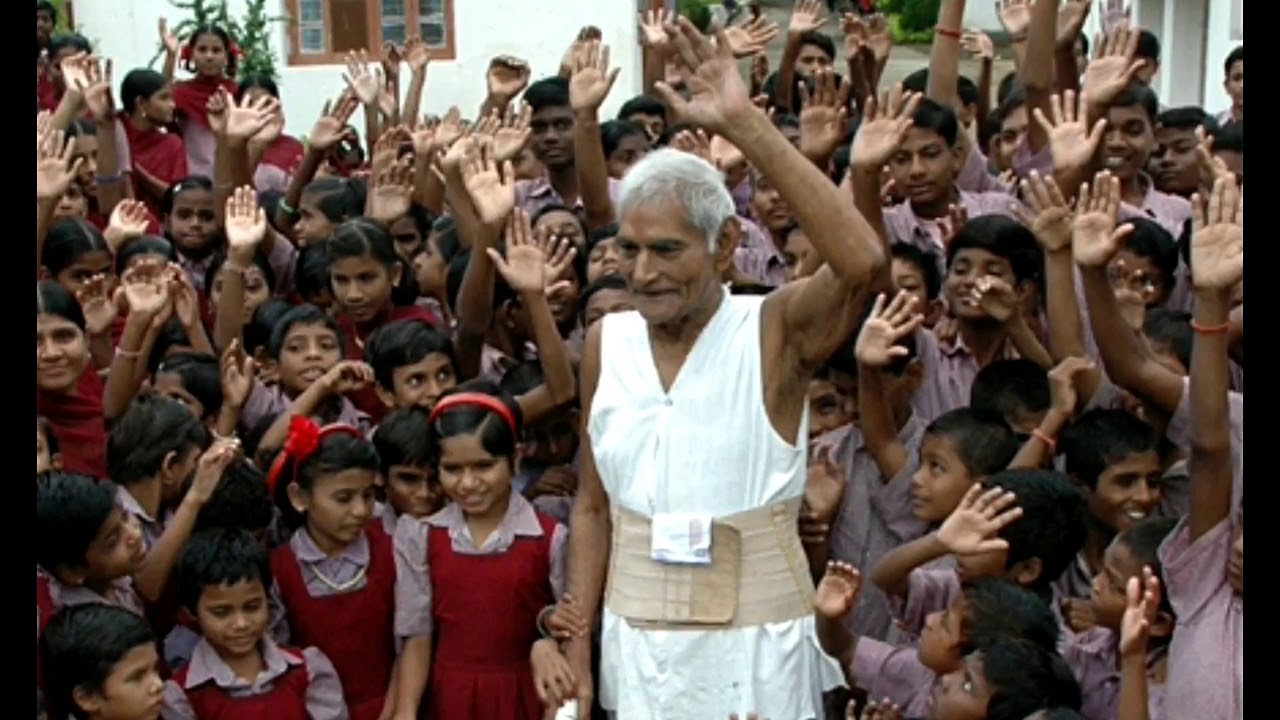 In June 1951, he got a land from government with a lame cow and a dog, and fourteen rupees (around $2 in those days), accompanied by his wife and two infant sons and a handful of patients. He called this place Anandwan, the Forest of bliss. Baba worked and the leprosy patients worked shoulder to shoulder with him. Self-trained and self-taught, they converted rocky barren land into lush green fields. Life in the early days was very hard. So they started growing not only vegetables but also prepared fields for growing millets, bajri and jowar. But this produce could not find a market in Warora. People feared contamination from food grown by 'lepers'. It took a contingent of fifty young volunteers of the Service Civil International to solve this problem. These young people, from thirty-six different countries, spent three months working at Anandwan. Seeing the foreigners toiling away among the leprosy patients even local people felt moved to make some contribution and many provided food for the volunteers. Gradually, the scale and facilities of Anandwan grew. Once the leprosy-affected persons were fit enough to leave the hospital they ceased to be 'patients'. They became working members of the community, busy in the fields or workshops where a variety of products were being manufactured. This made Anandwan a virtually self-sufficient 'village'. Eventually, it needed to buy only salt, sugar and petrol from the outside. Everything else was locally produced at Anandwan. Most of the erstwhile patients, having learnt a skill, returned to the world outside, self-reliant and capable of earning their own living.

As he puts it, "You dare call them dis-abled", "They are the able-disabled". Baba Amte was convinced that the fear of leprosy was far worse than the disease itself and that this fear must be addressed if any meaningful rehabilitation was to be achieved. What the patients needed more than anything else was hope, dignity and self-respect. Baba believed that only work could build a whole human being and so followed the concept - "Charity Destroys; Work Builds."

Amte died in Anandwan on February 9, 2008. According to his wishes, his body was buried, and not cremated in accord with the traditional Hindu practice.Upon Amte's death, the 14th Dalai Lama, said, "Amte's demise is a great loss to all of us. I am an admirer of Baba Amte. I vividly remember my visit to his thriving community of handicapped people at Anandvan in 1990"

I believe as a society we have to evolve, through experimentation, a system which combines the principles of individual freedom and common ownership. And this is what we have tried, basically with success, in all our projects, involving leprosy patients, tribal people and the so-called 'disabled' persons. Consider the honey-bee. Its treasure is nectar, obtained even from the chilly plant. It is not at the cost of the flower. In fact, its act of extracting honey contributes to the progress of the flowers. You need not learn from Kahlil Gibran, Marx or Gorbachev, not even from Gandhiji. Choose instead to learn your lesson from the honey bees as your silent partners: they will show you how to develop without destroying.

Carry your ideals before you like banners; it is not enough to put them on pedestals. Ideals which grip the masses prove to be a mighty force. Their force is stronger than the hope of earthly gain and they are more productive of real wealth ... Nationalized ownership that throttles all creative effort, will no more be the test of revolution. Participation in decision-making will stimulate workers to greater efforts and common ownership will be the aim. ... The war-cry will no more be with Marx and Mao: the spirit of revenge cannot build a new world ... Only a revolution which leads to a higher sense of human dignity can lead to a higher and nobler way of life. Revolutions based on hatred and violence does not really change the situation. They merely transform the people who had been exploited into a new class of exploiters but hatred and exploitation remain. Therefore, there is no substitute for Gandhi's way of rousing the impoverished masses to creative awareness.

The new leadership in India is taking shape quietly, without any drum beating through the newspapers. ... Various centers, the centers of energy and strength in the life of society are gaining tremendous momentum. May be, the surging new generation of today appears to have lost its bearing, to have lost its soul. But it is absolutely certain that one day it will have its own leader and prophet.... I am absolutely confident that the phoenix of a new leadership is rising from the ashes of all its failure. Soon the world will witness the lightning hidden in its beak and the storm hidden in its wings."

These multi-dimensional efforts won Anandwan a string of national and international awards which brought it both fame and funds.