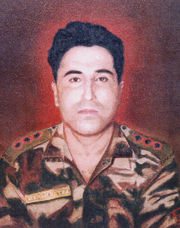 Captain Vikram Batra PVC (September 9, 1974 – July 7, 1999) was an officer of the Indian Army, posthumously awarded the Param Vir Chakra, India's highest award for valour, for his actions during the 1999 Kargil War in Kashmir between India and Pakistan.Vikram Batra was born on September 9th, 1974 in Mandi, Himachal Pradesh, to Mr. G.L. Batra and Mrs. Jai Kamal Batra.Batra joined the Indian military academy in Dehradun in 1996, and was commissioned in the Indian Army as Lieutenant of the 13 Jammu and Kashmir Rifles at Sopore, in Jammu and Kashmir. He was called Sher Shah ('Lion King' in Hindi) for his unstinting courage

Captain Vikram Batra was awarded the Param Vir Chakra, India's highest military honor on 15 August 1999, the 52nd anniversary of India's inPakistani invaders had taken positions in bunkers at a height of 17,000 feet on Peak 5140 in Jammu and Kashmir. Lieutenant Batra and Captain Sanjeev Jamwal -- both from the Kangra valley in Himachal Pradesh -- were ordered to recapture the peak on the night of June 19, 1999, about five weeks after the Kargil war began. The operation was much too dangerous to be carried out during the day. Aware of the enemy's vantage point, Lt Batra -- who was later promoted to captain on the battlefield -- decided to attack the enemy from the rear. dependence.Peak 5140, the highest point on the Tololing Ridge, was one of the most arduous and crucial peaks in the Drass region. If it fell, it would clear the Pakistanis from that sector and pave the way for further victories.He knew they had to win.

He decided to lead the rear, as an element of surprise would help stupefy the enemy. He and his men ascended the sheer rock-cliff, but as the group neared the top, the enemy pinned them on the face of the bare cliff with machine gun fire. 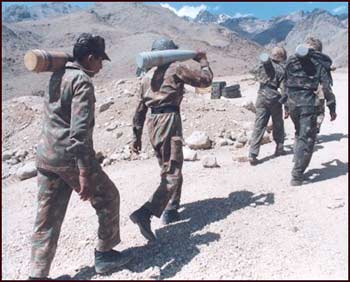 It was dark and cold. The men crawled, quietly. Batra, who had earned an instructor's grade as a commando, was determined not to lose any men.He was deeply upset when a terrorist's bullet meant for him had struck his man behind him during his first posting in the terrorist-prone region of Sopore in Jammu and Kashmir.'Didi, it was meant for me and I lost my man,' he had told his elder sister over the phone.

Captain Batra, along with five of his men, climbed up regardless and after reaching the top, hurled two grenades at the machine gun post. He single-handedly killed three enemy soldiers in close combat. He was seriously injured during this, but insisted on regrouping his men to continue with the mission. Inspired by the courage displayed by Captain Batra, the soldiers of 13 JAK Rifles charged the enemy position and captured Point 5140 at 3:30 a.m. on 20 June 1999. His company is credited with killing at least eight Pakistani soldiers and recovering a heavy machine gun.The camp was routed, many enemy soldiers killed and 13 J&K Rifles won a decisive victory.All his men had made it alive.Vikram was elated. 'Yeh Dil Maangey More' -- the Pepsi catchline those days -- he told his commander at base camp.His words became the catchline for the Kargil war.Vikram Batra had led a brilliant operation in one of India's toughest campaigns in mountain warfare. His men swore by him. General Ved Prakash Malik, then the Chief of the Army Staff, called to congratulate him. His triumph was being beamed from television screens across the country.Photographs of him and his men striding the captured Pakistani gun at the base camp made it to every newspaper.Vikram Batra was the hero of the nation. Two weeks after his conquest of 5140, people would remember him as the Lion of Kargil. 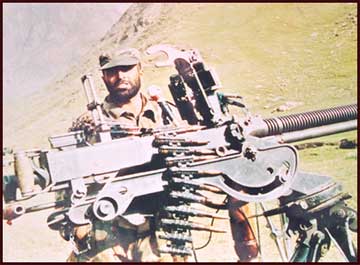 The capture of Point 5140 set in motion a string of successes, such as Point 5100, Point 4700, Junction Peak and Three Pimples.A fortnight after he became the face of the Indian soldier in the Kargil war, Vikram Batra died.He was mortally wounded on the morning of July 8 after fighting through the night while recapturing Peak 4875. He was ill but had insisted that he was fit for the mission and completed it in a manner that put him alongside some of India's greatest military heroes.Vikram with his men had begun a tortuous climb to strengthen the flanks of the Indian troops fighting the invaders at 16,000 feet.The conditions were extremely tough. At a gradient of 80 degrees, the thick fog made the advance even more precarious.The enemy got wind of Batra's arrival. They knew who Sher Shah was, by now his military prowess had become the stuff of legend.Vikram with another young officer, Anuj Nayyar, fought the enemy's counter-attack ferociously.They cleared enemy bunkers, egged their men forward, engaged in a hand-to-hand combat and forced the Pakistani retreat.The mission was almost over when Vikram ran out of the bunker to rescue another junior officer who had injured his legs in an explosion."His subedar begged him not to go and said he would go instead," says his father, "but Vikram told him: 'Tu baal-bacchedar hain, hat ja peeche. [You have children, step aside]"He lunged forward to save the young lieutenant, when a bullet pierced through his chest.By the morning India won back Peak 4875 but lost Vikram Batra.

For his sustained display of the most conspicuous personal bravery and leadership of the highest order in the face of the enemy, he was awarded India's highest decoration in battle -- the Param Vir Chakra, posthumously. His comrade in battle, Anuj Nayyar, also died while clearing his fourth enemy bunker. He was awarded the Maha Vir Chakra -- the nation's second highest honour. In a time of war, Vikram became the face of the young Indian soldier who fought ferociously and died fearlessly