The introduction of high-yielding varieties of seeds after 1965 and the increased use of fertilizers and irrigation are known collectively as the Green Revolution, which provided the increase in production needed to make India self-sufficient in food grains, thus improving agriculture in India. Famines in India, once accepted as inevitable, have not returned since the introduction of Green Revolution crops.

The term "Green Revolution" is a general one that is applied to successful agricultural experiments in many Third World countries. It is not specific to India. But it was most successful in India. 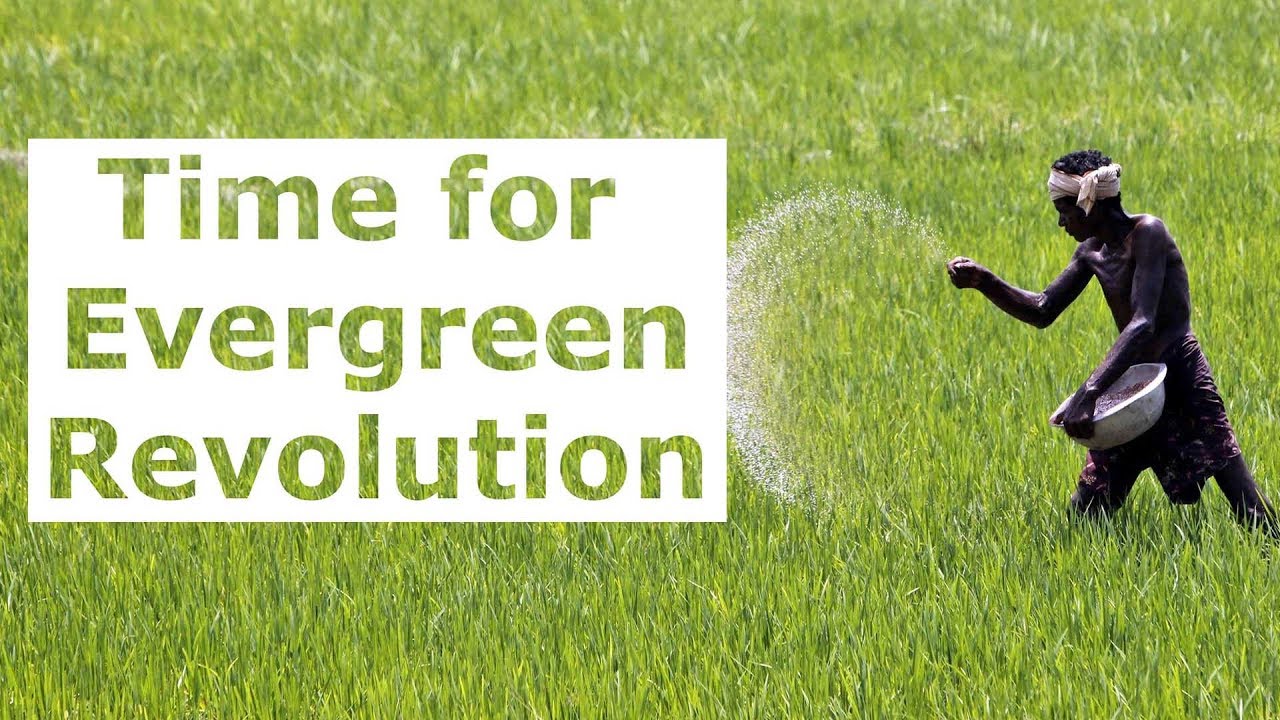 There were three basic elements in the method of the Green Revolution:
(1) Continued expansion of farming areas;
(2) Double-cropping existing farmland;
(3) Using seeds with improved genetics.

Continued expansion of farming areas
The area of land under cultivation was being increased right from 1947. But this was not enough in meeting with rising demand. Other methods were required. Yet, the expansion of cultivable land also had to continue. So, the Green Revolution continued with this quantitative expansion of farmlands.

Double-cropping was a primary feature of the Green Revolution. Instead of one crop season per year, the decision was made to have two crop seasons per year. The one-season-per-year practice was based on the fact that there is only natural monsoon per year. This was correct. So, there had to be two "monsoons" per year. One would be the natural monsoon and the other an artificial “monsoon”.
The artificial monsoon came in the form of huge irrigation facilities. Dams were built to arrest large volumes of natural monsoon water, which were earlier being wasted. Simple irrigation techniques were also adopted.

This was the scientific aspect of the Green Revolution. The Indian Council for Agricultural Research (which was established by the British in 1929 but was not known to have done any significant research) was re-organized in 1965 and then again in 1973. It developed new strains of high yield value (HYV) seeds, mainly wheat and rice, but also millet and corn.

The introduction of dwarf high-yielding varieties of wheat like Lerma Rojo and Sonora 64, on Indian soils during the mid 1960s coupled with farm technology, use of other inputs like chemical fertilisers and pesticides and backed by a strong governmental support allowed cereal production to increase manifolds to feed hungry mouths, thus bring about the green revolution. This led to rapid increase of cereal production and transformed India from a food hungry to self sufficient country.

Discovery of Nirin-Trigger to Green Revolution:

In the huge occupation force was S. Cecil Salmon of the US Agricultural Research Service [ARS]. Salmon was focused on agriculture and that was how he chanced upon the legendary Norin strain of wheat that was to trigger the Revolution. Norin was a dwarf variety with little foliage (leaves) and a heavy head of grain. Salmon sent this to the US for further study. In Washington State University at Pullman, a team under Orville Vogel researched the dwarf wheat. It took 13 long years of experimentation. Norman Borlaug --the icon of the Green Revolution-- picked up Gaines and crossed it with Mexico's best varieties at the International Maize and Wheat Research Centre there.

India’s condition, A Miracle and A HOPE:

By the 1960's India was desperate for a breakthrough. The nation's self-confidence was at ebb. Nehru was aging. Political uncertainty loomed. Food crises were prevalent. Marginal increases were only through bringing more land area under cultivation and not through increases in productivity. Food reserves were nil. India was just about meeting its deficit with imports. Clearly a quantum leap was needed.

It was then that India discovered Borlaug and the Norin dwarf. A small field at Pusa was seeded and the results were dramatic. It was what India had been waiting for. Once Borlaug and India were convinced that they had a solution, the realisation of what needed to be done dawned.

Instead of tragedy, though, a miracle was born in the mid 1960s at Swaminathan's laboratory in New Delhi--and, a few years later, at the International Rice Research Institute in the Philippines, which he later headed. Swaminathan brought into India seeds developed in Mexico by U.S. agricultural guru Norman Borlaug and, after cross-breeding them with local species, created a wheat plant that yielded much more grain than traditional types. Scientists at IRRI accomplished the same miracle for rice. Imminent tragedy turned to a new era of hope for Asia, paving the way for the Asian economic miracle of the 1980s and 90s. That turn of history, one of the truly astonishing transformations of the century, is now known as the Green Revolution.

Fertilizers were a dead end; when the wheat plant's pod grew more seeds, its stalk collapsed under the weight. It was then, with help from the Rockefeller Foundation, Swaminathan found a cross-bred wheat seed, part-Japanese and part-Mexican, that was both fruitful and staunch. (He would later “marry” this plant to an Indian variety to produce the golden-colored grain favored by Indians).

That was the breakthrough in the Green Revolution.

Reserves usually refer to grains such as wheat, corn, sorghum, rice and soy beans not needed to meet immediate demands. They can be in storage, in transit or in the yield ready to be harvested. Most food statistics use grain as the common measure because it is the major source of calories for man and provides the basic feed for animals.

The first harvest with the new seeds was three times greater than the previous year's.
But the revolution was still incomplete. Only Punjab state had the right irrigation for the new technologies, the state-run food collection and distribution networks were notoriously inefficient, and new fertilizers and pesticides were needed, along with credit lines for small farmers.