25th August 2007: At least 40 people were killed and scores injured in two powerful blasts in Hyderabad, one at an amusement park packed with weekend holidayers and another at a landmark eatery in the heart of the city on Saturday evening "Whenever such an event happens for some time all of us become very sensitive to issues relating to safety. But as time progresses the same lethargy and negligence that contributed to earlier disasters creeps in. The need of the hour is a well planned strategic and consistent approach to ensure safety and preparedness."

The News of the bomb blasts in Hyderabad reached relatively late at Sankalp Headquarters. One of the Sankalp Volunteers from Hyderabad called up and informed of the incidence. Terror had struck again and we had no plan in place. In line with the history of our response to disasters, we took action right away.

The Volunteer who had called from Hyderabad is a girl of about 17 years of age. She had never before in life thought that she will be participating in the immediate relief operations after the disaster. Like a sensitive teenager who cares for the society, she too was hurt and saddened by the incidence. But by the time she hung the receiver of the phone, things had changed. She had no time to brood over the happening. Nor did she lament. She had already begun planning a list of blood donors keen on donating blood if required immediately.

800 kms away in Bangalore, the buzz in the Sankalp Headquarters was indicating "Code Red". Code red is a Sankalp Signal which indicates that Volunteers will be asked to leave whatever they were involved in their lives behind and work with undiluted attention to provide disaster relief. In seconds of receiving the news of the blasts, a three member team was assigned the job to contemplate and brainstorm. At the same time one Volunteer who had the best experience at Disaster Management left for a friend's place where both Cable TV and Internet facility were available. 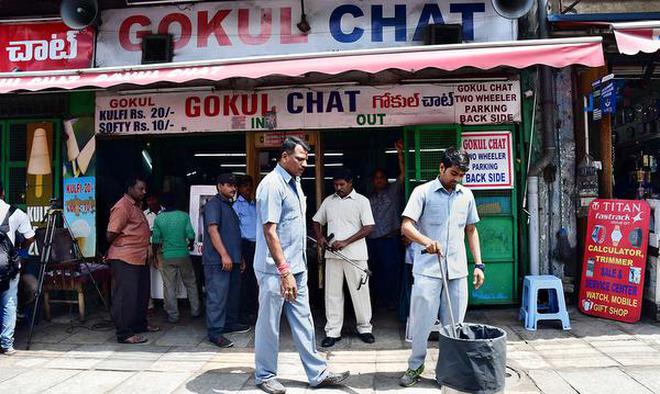 Our Experiments and Experiences with Disasters in the past have taught us how to fish out the right information from the vast sea of emotional drama and mis-representation that infects the live reports of media after the disasters. This proved invaluable. In about 5 minutes, we had the comprehensive list of hospitals and their contact numbers where the injured were most likely to be admitted. There was also a clear understanding of the extent of damage.

With right information in hand, we moved on to make the final plan of action. In 15 minutes of our hearing about the disaster, 5 Volunteers were concluding the finer details of the plan. The following was decided:
-> One Volunteer will establish contacts with all the hospitals and find out if blood is required for the victims. This person was also responsible for the setting u of a communication path between the Hospitals and us.
-> The Hyderabad based Volunteers were to prepare a list of emergency blood donors and add as many names to it as possible. In the event of the first volunteer deciding on shortage, this Volunteer was responsible for the donations.
-> One Volunteer was expected look over all actions and make decisions where required.
In spite of the fact that the blasts killed more than 50 innocent people, they cannot be labelled as a disaster. A disaster is one event in which the people who of the affected area require external assistance to be able to recover. Here that was not the case. Hyderabad was sufficiently equipped to take care of the situation. So no further action was taken.

being treated. Luckily there was no shortage of blood.

Outcome:
The following are the noteworthy outcomes of this incidence at Sankalp:

01. Sankalp got dedicated and determined Volunteers from Hyderabad
This incidence enables Nirusha and Smruthi to come face to face with what is Sankalp way of work. The response of these two girls on the face of the attack is an example and an inspiration. They successfully prepared a list of 40 donors including rare groups and maintained communication with the hospitals. With this Sankalp found two more people all set to be Modern revolutionaries.

02. The Need of Preparedness Reemphasised:
The loopholes that had crept into the organization owing to a long gap between last disaster relief exercise and this one were eliminated. We could clearly see how un-prepared we were and we were able to understand the places where we have or might have gone wrong in case this incidence took place in BANGALORE.

03. Stage Set for Bangalore Emergency Repose Policy
This paved the way for the realization of a standard emergency response policy for Bangalore. Sankalp will try to push this policy to as many relevant stakeholders as possible.

Overall, we did realise that the 4 step Disaster Relief Process constituting information collection, evaluation, and planning, execution and review together can make a huge difference to the quality and effectively of the response that we give to causalities and disasters. We are aiming at a condition in which the review stage has nothing but praises for the people who put together the disaster response.