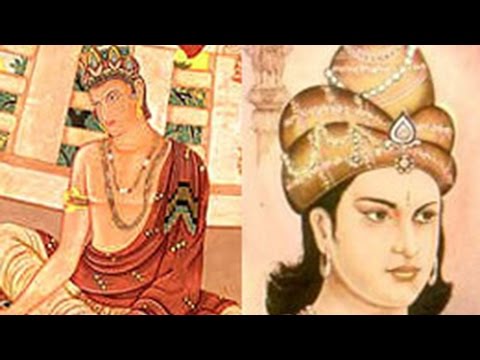 According to a legend, while Chanakya served as the Prime Minister of Chandragupta Maurya, he started adding small amounts of poison in Chandragupta's food so that he would get used to it. The aim of this was to prevent the Emperor from being poisoned by enemies.

The court of Chandragupta Maurya, especially Chanakya, played an important part in the foundation and governance of the Maurya dynasty

One day the queen, Durdha, shared the food with the Emperor while she was pregnant. Since she was not used to eating poisoned food, she died. Chanakya decided that the baby should not die; hence he cut open the belly of the queen and took out the baby. A drop (bindu in Sanskrit) of poison had passed to the baby's head, and hence Chanakya named him Bindusara. Bindusara would go on to become a great king and to father the greatest Mauryan Emperor since Chandragupta - Asoka. When Bindusara became a youth, Chandragupta gave up the throne and followed the Jain saint Bhadrabahu to present day Karnataka and settled in a place known as Sravana Belagola.