Dal lake of Kashmir is one of the most beautiful and picturesque lakes in India.It has been and continues to be a part of the poetry by some renowned poets.The second largest lake of Jammu and Kashmir state, Dal Lake is encircled by magnificent mountains on three sides. Adorning the banks of the Dal Lake is a number of blooming gardens and orchards. Five basins and a number of channels well linked with each other are some of the features of the lake. Dal Lake is approximately 6 km by 3 km in size and changes its moods and scenery after every few kilometers. Houseboats form an indelible part of the scenery of the Dal Lake that are always ready to take tourists to a romantic and peaceful ride of the lake and soothe their nerves as the houseboat floats over the slightly rippling waters. They also offer some of the most exotic views of the splendid scenery of the Dal Lake. Dal is a Himalayan urban lake which is mainly used for tourism. Fishery is of secondary importance. The lake comprises five basins and a myriad of inter- connecting channels. It is one of the most beautiful lakes of India. A large number of gardens and orchards have been laid along the shores..Dal Lake is unique in having hundreds of house boats which afford an opportunity to tourists to reside on the lake in an atmosphere of peace and tranquility. The boats are served by Shikaras which more or less resemble the gondolas of Venice but are smaller in size and are tastefully decorated. Besides the Moghul monuments the campus of the University of Kashmir is also located along the shores of the lake. Overlooking the lake are two hillocks which house the famous temples of Shankaracharya and Hari Parbat.A perennial inflow channel enters the lake from the north and supplies about 80% of the water. Towards the southwest side an outflow channel drains the lake water into a tributary of the River Jhelum. Parallel to this exit is a stone-lined canal which connects the lake with the tributary. This channel is used for movement of boats in and out of the lake and prevents inundation of floating gardens during high floods. The floating gardens of Dal Lake are considered a beauty in themselves. One can find a number of restaurants and hotels at the lakefront that have sprung up, encouraged by the large influx of tourists here. Apart from the houseboats, the Lake and Waterways Dal Authority allows kayaking, canoeing, water surfing and licensed angling on the lake

The famous Moghul gardens around the lake have been laid during 16-17th century and their number was about five hundred but now only a few of these have survived. The origin of the lake has remained unresolved. It is believed by some geologists that the Dal Lake is the remnant of a Pleistocene oligotrophic lake which once covered the entire valley of Kashmir. There are other geologists who believe Dal to be a flood plain lake.The lake water is being used for irrigation of vegetable fields which have grown in number and extent during recent years. The present maximum depth of the lake is 6 m (Nagin basin). Many aquatic plants growing in the lake are used as food, fodder and compost. The lake has some interesting flora and fauna. The flora include lotus flower, water lillies and water chestnuts. Notable birds are kingfishers and heron.

The Dal lake of Kashmir, India is divided into four parts by causeways, namely Gagribal, Lokut Dal, Bod Dal and Nagin. Scenery of this lake also consists of clusters of sloping roofed houses on its islands. Apart from being one of the greatest attractions of the valley, Dal Lake also supports the second largest industry of the region, fishing. The plethora of fishes in the lake provides occupation to a large number of people in the valley. Wi-Fi internet access was implemented across the lake in November 2003, making it the first lake in the world to provide wireless internet connectivity.Uncontrolled macrophytic growth, introduction of exotic species like azolla , salvinia etc and silt are major problems affecting the lake.

The water quality of Dal Lake has deteriorated considerably in the last two decades. Large peripheral areas have been reclaimed and converted into floating gardens. With the increase in the tourist influx a large number of residential buildings, restaurants and hotels have come up along the lake front. The number of house boats has also been increasing at an alarming rate. As a result of rapid and unplanned urbanization, large quantities of raw sewage are discharged in the lake water, which might pose health problems in the near future.

The main environmental issues are excessive weed growth, reduction in water clarity, enrichment of waters and high microbial activity. A Dal Development Project was formulated in 1978 and the State Government of Jammu and Kashmir adopted it with some modifications. The main thrust of the project is to improve the lake environment by using both physical and biological approaches. The work is in progress.

Char Chinar
In the middle of the Dal stood 4 mighty Chinar trees. It is a wonderful thing to see trees in the middle of the lake with no trace of land anywhere close by. Now one of them is gone. The image shows the remaining three.

Cruising through the Dal
Beyond the vast open space, the Dal has lot of backwaters like this one. Full of greenery , a wide variety of flowers, fruits and vegetables are cultivated here. The Shikara is the only available mode of transportation.

Bountiful nature
If there is one place where a man can forget all the worries and just relax, it is this lake. No doubt the Mughals dubbed it as the paradize on earth.

Floating Gardens
What you see in the iamge are flating gardens in the Dal. Lareg quantities of vegetables are grown over these floating rafts. The visitors are amzed at the extent of these huge gardens.

Ever shopped in a lake
There is a huge market on the bansk of the Dal. You can get anything from fine silks, woolens, daily necessatities, food, takeaway gifts and more.

Hazratbal dargah
On the far side of the Dal we ahve the Hazratbal Dargah.

The Mughal Gardens
The magestic Mughal Gardens extend on one side of the Dal. Chashmashahi ("The royal spring"), Nishat ("abode of peace") and Shalimar ("abode of love") where Mughal emperors once relaxed with their exquisite queens. 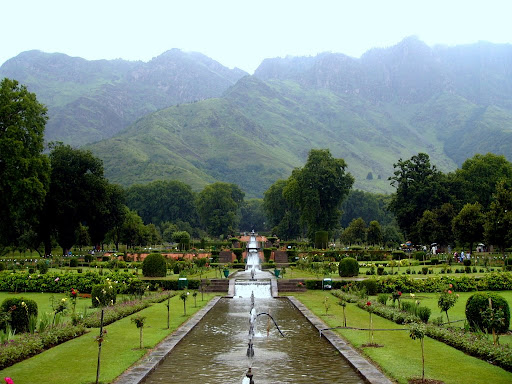 Fancy Shikaras
Tourists go around the Dal in no ordinary boats. These beautifully decorated Shikaras give you the space to relax and enjoy the beauty of the Dal.

Frozen Dal
When cold wave sweeps through the valley, the Dal lake freezes. With very little that people can do in those months young lads enjoy a game or two of cricket on the surface of the lake.

House Boats
Hospitality at it's very best is what you get in the houseboats of the lake. Exquisite woodwork, fine carpets and expensive lights - it is an occasion to spoil yourself while you are in Srinagar. 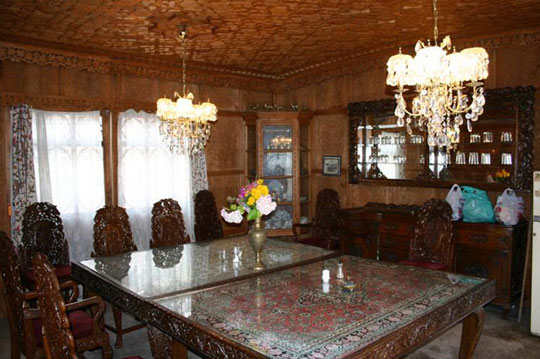