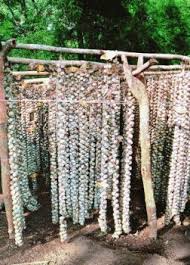 Kosa silk is a type of silk which is basically produce in central india in Chattisgarh region. Kosa silk is known for its comfort and popular in other countries. Bilaspur, Raigarh, Champa of chattisgarh are known for kosa silk and its produce by Dewangan community. Also known as Tussar Silk, Kosa is valued for its purity and texture. Kosa Silk is drawn from cocoons especially grown on Arjun, Saja or Sal trees.Kosa silk is widely popular for its softness and elegance. Being a shiny, lustrous and soft silk, Kosa is extensively used for making traditional Indian dresses including sarees, kurtas, salwar suits, shirts and many more garments. Available naturally in shades of gold-pale, dark, honey, tawny, baccoto beige, creamy, etc. Tussar Silk is considered an ideal as well as auspicious wear for marriages, religious ceremonies and other important functions. The kosa silk is widely demanded due to its excellent quality.

The sturdy kosa yarn used extensively in fashioning menswear, including shirts, sherwanis, jackets, vests and shawls, is obtained from cocoons after the fully-formed silkworm moths leave them. Called Gichha, this coarse yarn is higher priced than the fine silk yarn as it is more durable,.Each cocoon woven by the kosa silkworm yields 1-2 grams of raw silk yarn, equivalent to about 300 yards of thread. However, due to the rarity of the kosa worm and the laborious cost of cultivating it, the raw silk yarn is often used to create blended yarn with cotton or polyster. During the extraction of yarn, there is often wastage in the form of cut threads. These bits are used to craft accessories such as trendy purses, handbags and even jewellery pieces. 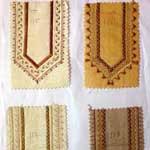 The silk is valued for its texture which lends itself beautifully to printing and painting and is therefore increasingly used in designer boutiques to craft some of the most innovative motifs ever. It would be no exaggeration to say that the fabric is an ode to the imagination of the weavers, as each of the typical Fera and Jaala weave patterns seems to narrate its own special tale, with inspiration drawn from sources ranging from Nature to mythological stories. The original rich gold shade Tussar is dyed with colours of a very special hue and depth. Earlier only natural dyes were used which included yellow from the palaas flame of the forest, the Kusum Flower, the rich red pollen dust of the Rora Flower and the deep rose red from Lac. But with time the range of colour and motifs have increased dramatically. The Kosa cloth is available in a range of colours and patterns that are block-printed, painted or embroidered.

The rate of pure kosa silk is very reasonable. The price of a kosa sari may range from as little as Rs 400 to several thousands, depending on the purity of the silk as well as the handwork and accessories used on it. Particularly famous are the kantha-embroidered Kosa wear which chiefly involve floral and abstract designs made of small running stitches in a medley of colours ranging from the riotous to the more sober pastel shades. The silk can also be blended with some other common fabrics for making beautiful dress materials. Bafta is a known blend of tasar and cotton. Shawls and mufflers are also produced using a blend of oak tasar and other natural fibres like wool, cotton, etc. The story of kosa silk however does not end with fashion accessories and clothes! A range of chic utility items and décor objects are aesthetically produced from a third type of yarn that gets woven on tree twigs by the kosa larvae. Produced naturally in only two colours — black and cream — this sturdiest form of yarn is used to make doormats, rugs and cushion covers, often adorned with mirror and embroidery work.

India is the second largest producer of tussar silk in the world and the exclusive producer of Indian tussar, also known as tropical tasar. This variety of tussar silk is largely woven by tribals in the Gondwana belt. The major tussar silk producing states in India include Jharkhand, Chattisgarh and Orissa, Maharashtra, West Bengal and Andhra Pradesh.Two places namely, Korba and Champa in Chattisgarh state of India are known for producing high quality Kosa silk. The Kosa silk produced in Champa is treated as the best silk all over the world.The precisely finished and designer garments produced from Tussar or Kosa silk are world famous and are exported to various countries worldwide including Europe, Gulf and the United States