Spiti valley - a world within a world

Rudyard Kipling had described Spiti valley as 'a world within a world' in his celebrated novel Kim. Over a century has passed, but not much has changed in this world, as it continues to remain relatively unknown, hidden between multiple folds of valleys and mountains, a world within another world. The name 'Spiti' means 'The Middle Land', i.e. the land between Tibet and India. Bordered by Ladakh in the north, Tibet to the east, Kinnaur to the south east, and the Kullu Valley to the south, this peculiar cold desert spans an area of almost 8000 sq km.

With an average height of around 12,500 feet above sea level, it consists of alpine land, scattered with small villages and Buddhist monasteries, and surrounded by mountainous peaks capped with gleaming snow. Spiti valley is one of the least populated regions in India and is the gateway to the northernmost reaches of the nation, and forms part of the Lahaul and Spiti district of Himachal Pradesh. The Rohtang Pass, at 13,054 feet (3,979 m), separates Lahul and Spiti from the Kullu Valley. Lahul and Spiti are cut off from each other by the higher Kunzum Pass, at 15,059 feet (4,590 m). A road connects the two divisions, but is cut off frequently in winter and spring due to heavy snowfall.

The valley receives heavy snowfall during winter. This results in many villages being completely cut off from the rest of the valley. The valley is likewise cut off from the north up to eight months of the year by heavy snowfalls and thick icing conditions. A southern route is periodically closed for brief periods in the winter storms of November through June, but road access is usually restored a few days after storms end via Shimla and the Sutlej in the Kinnaur district. Due to high elevation one also is likely to feel altitude sickness in Spiti. Spiti is a high altitude desert. The mountains are barren and largely devoid of a vegetative cover. The majority of people who inhabit the area are farmers who produce crops of barely, wheat, and peas. Only one crop per year is possible, due to the extreme weather.

The Spiti River is a near-constant companion of the road running from Kinnaur to Spiti valley. The river originates from Kunzum range and Tegpo and Kabzian streams are its tributaries. Water draining the famous Pin valley area are also a part of the Spiti river system. Its position across the main Himalayan range deprives it from the benefit of the South-West monsoons that causes widespread rain in most parts of India from June to September. The sub-divisional headquarter, Kaza, is also situated along the Spiti River. The capital city sits on the eroded flood plain of the river and is the biggest settlement here. Other settlements along the Spiti river and its tributaries include the Hansi and Dhankar monastery.

Spiti is home to a purely homogenous Buddhist society of just over 10,000 people, who bear stark cultural similarities with their neighbours in Tibet & Ladakh. The valley is a research and cultural centre for Buddhists. Highlights include Ki monastery and Tabo monastery. Tabo monastery was founded in AD 996 by Ringchen Zangpo, the Great Translator, as Tibet's Guge kingdom expanded into these outlying territories, and is reckoned to be the oldest continuously functioning Buddhist monastery in India. The dull mud-brick walls of the monastery hide some of the finest of all Indo-Tibetan art.

The monastery is a favourite of the Dalai Lama, and was the location of the the Indian films Paap and Milarepa, a biographical adventure tale about one of Buddhism's most famous Tibetan saints. The Pin Valley of Spiti is home to the few surviving Buchen Lamas of the Nyingmapa sect of Buddhism. The small town of Manali was the beginning of an ancient trade route to Ladakh and, from there, over the Karakoram Pass on to Yarkand and Khotan in the Tarim Basin. Spiti is summer home to hundreds of semi-nomadic Gaddi sheep and goat herders who come to this valley for grazing their animals from the surrounding villages and sometimes as far as 250 km. They enter the valley during summer as the snow melts and leave just a few days before first snowfall of the season. 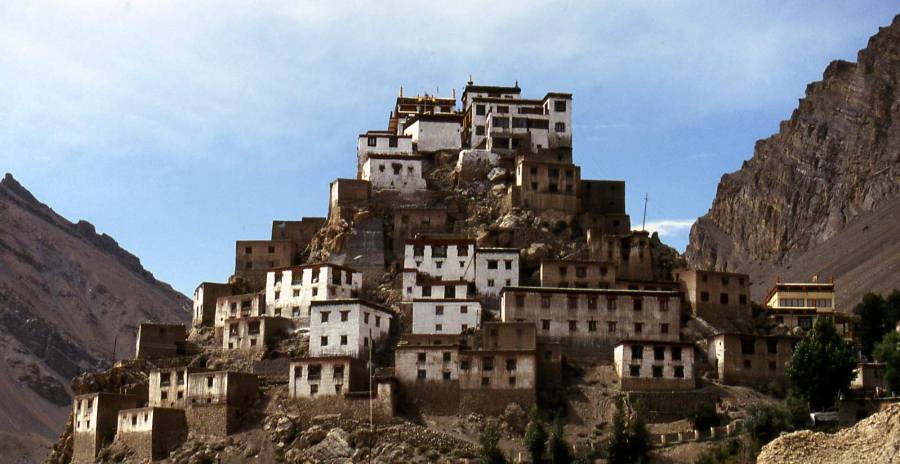 The ideal time to visit Spiti is from May to October, when the valley is the most accessible. It is a time when the sun shines high over the valley, which is not merely a destination, but a journey through melancholy roads, eloquent villages, shimmering rivers, and mighty mountains. A world within another world, indeed.