Tsongmo Lake or Changu Lake is a glacial lake in the East Sikkim, India, some 40 kilometres (25 mi) away from Gangtok at altitude of 3,780 m (12,400 ft).The lake is about 1 km. Long, oval in shape, 15 meters deep and is considered sacred by the local people. The lake has charming Alpine forests, which is home to some rare animals like the Red Panda, Brahminy ducks and variety of birds. It's cool, placid water harmonizes with the scenic beauty around. A small temple of lord Siva is constructed on the lakeside.

In Bhutia language, the literal meaning of 'Tsomgo' is 'source of the lake'. 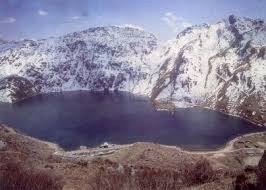 In fact, the etymology tells that 'Tso' means 'lake and 'Mgo' means head.The serene Tsongmo Lake is also the groundwork of Lungtze Chu, which further meets Rangpo Chu down in its course. Earlier, the Lamas used to read the color of waters and predict about the future.

This placid lake remains frozen during the winter months up to mid-May. In the summers, Tsomgo derives its placid waters from the melting snow of the mountains around. Between May and August it is possible to see a variety of flowers in blooms, including the rhododendrons, various species of primulas, blue and yellow poppies, irises etc. It is also an ideal habitat for thered panda and various species of birds.

The area is controlled by the Indian Army and hence an inner line permit is required by Indians to visit this place. Foreign nationals are not permitted to visit this lake without special permission.They will ask you to visit the lake before noon due to inclement weather. Rides on Yaks are offered at the lake side.Tea and snacks are available at the lake side during the tourist season. Owing to promotion of tourism in Sikkim, local residents have arranged shops that sell yak cheese, trinkets and local curios here. On the whole, Tsongmo Lake is definitely worth-visiting on your trip to Sikkim.