A journey from the Dark to the Brightness 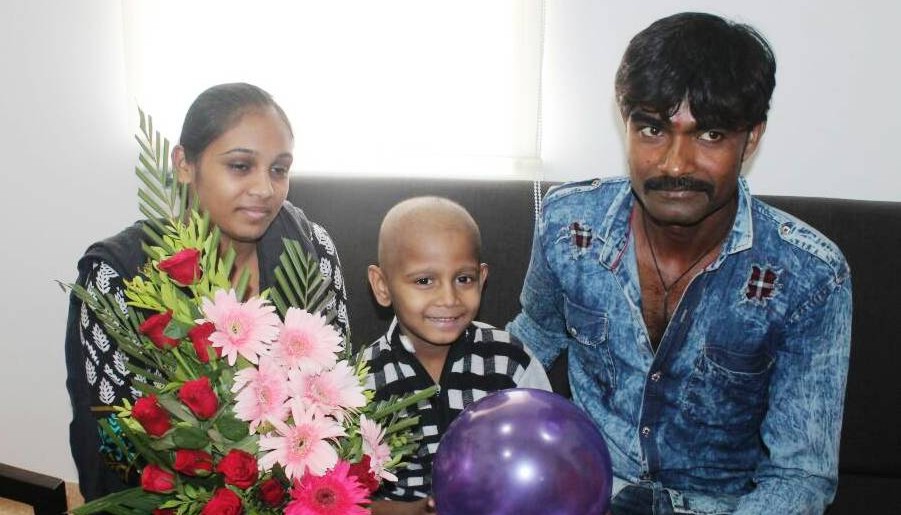 Rajnikant and Minakshi, living in a small village near Junagadh in Gujarat, were filled with joy when their first son was born. All the senior family members were also happy. They named him Ronak which meant grace, and by the grace of God he was their gift. Truly he brought "Ronak" in their family.

But after the first few months of his birth the "ronak" on Ronak's face gradually started disappearing. Both the parents started worrying as his health was getting bad. They began to wonder what was happening suddenly,  why was their little boy looking so pale and dull? They took him to a nearby doctor in their town. Initially the doctor gave the child some iron supplements and tonic, but there was no improvement in his health. Later he suggested the family to go to Junagadh city and consult a hematologist.

In Junagadh, the hematologist examined the child and asked the family to get a HPLC test done and come back with a report. Unfortunately, the report confirmed what the doctor had feared. The report indicated that Ronak was suffering from a blood disease called thalassemia major. They were informed that this was a genetic blood disorder and now he would require blood transfusion at regular intervals all his life. They were also informed that the only way to be permanently cured from thalassemia is Bone Marrow Transplant which would be possible if there is a fully HLA matched donor. When all this was explained to the family and they were informed about the fact that the cost of BMT is INR 14,00,000, they lost all hope of his permanent cure and accepted all this as God's wish.

After few years Minakshi delivered a second child. They named the child as Harshad, which meant "Joy Giver". After few months, they went to Junagadh and got his HPLC test done. Fortunately, he was not Thalassemia Major. However, he was a thalassemia carrier.

On the other side, thalassemia management through blood transfusions and chelation was on for Ronak on a routine basis. Although it was free, it was hard for the family to go and spend one entire day for blood transfusion once in every 25 to 30 days. Gradually as he grew up the periodicity decreased as it was very difficult to get blood every time. It was hard for Ronak to be pricked so often. But he accepted this as a part of his routine life and he had learnt to be happy.

In September 2016, the family found out that there is a HLA testing program by Sankalp India Foundation at a blood bank in Rajkot city. They registered their name to be tested and gave buccal swab samples of Ronak and Harshad. After few months, they got the news that Ronak and Harshad have a full HLA match.  Harshad truly proved himself as "Harshad".

A Sankalp team member explained about the entire project of Bone Marrow Transplantation to the family which was about to be started in CIMS Hospital at Ahmedabad, under the title of Sankalp-CIMS Pediatric BMT Program. The program was on a Not for Profit basis and the cost of transplant was Rs. 900000. The team member also explained about the procedure of BMT to the patients. This meant nearly 3 months away from home for the child and the parents.

Financially, it was impossible for them to imagine how they would manage even half the amount. Moreover, Ronak's grandparents were aged. His grandfather was partially paralyzed and grandmother was unable to do entire household work in the absence of Rajnikant and Minakshi. But thanks to Rajvi, the elder sister of Rajnikant, who though being married promised to manage the house in the absence of Minakshi.

After much struggle, Ronak's family could manage only for Rs. 50000 by seeking help from their friends, relatives and employers. When the Sankalp team realized that the family is poor and unable to manage the finances, they went to their donors like Cipla, Tata Trust, JSS and explained the financial condition about Ronak. Through the support from these institutions funds for Ronak were managed.

Finally, on 31 March 2017, Ronak was admitted to CIMS hospital, Ahmedabad. His treatment started and the staff realised that Ronak is a very active kid. All the activities for his time pass  be it indoor games, TV, story books, sketch books and color boxes were available in the BMT unit. Ronak spent around a month and half in the unit. After completing the first stage of treatment at the unit, (which included conditioning and marrow transplantation) he was discharged and sent to the step-down facility for post-transplant management. Now he is on the path to complete recovery. Soon he will be sent home with a new life and hopes of a better future. We congratulate him for fighting the battle of thalassemia and getting a new lease of life. Our best wishes are with him for a healthy, happy and bright future.