We were denied blood until we got donors: the dark side of blood donation no one talks about

Medical emergencies have become heavily dependent on replacement blood donations which are not only unsafe but also a way of exploiting patients and their families. But here’s the catch – it's an open secret. 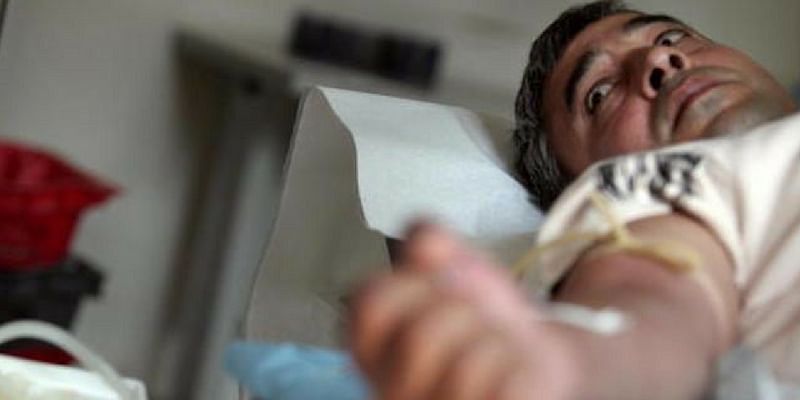 NACO defines replacement blood donors as those who donate blood when required by a member of the patient’s family or community (Image credit: Breitbart).

Ranganath D had been making frequent visits to the hospital ever since 2000 as his mother suffered from multiple myeloma, a cancer formed from malignant plasma cells in the blood. She needed blood transfusions every three months or so until last year when her condition worsened and she needed transfusions every 10 days. He recalls,

Every hospital/blood bank we went to denied blood un-til we brought in donors. I would insist it was an emergency and they would tell us ‘if we gave all our stocks to you, where will we get blood for others?’ So, I was forced to find replacement donors for very unit of blood my mother needed.

While some hospitals gave blood without insisting on replacement for the first few transfusions, they eventually asked him to bring donors for the successive ones. Ranganath recalls being exhausted in this search of donors which remained persistent till the last day of his mother’s life. Ranganath’s experience is one of many that patients and their families live through while in dire need of blood. This bloody side of blood donation is an open secret and has found its origins in a complicated system. What makes you a replacement donor? NACO defines replacement blood donors as those who donate blood when required by a member of the patient’s family or community. Voluntary blood donation on the other hand, is free of this ‘request’ and immediate need. Therefore, it is relatively free of any coercion or a hidden paid donation system which compromises the safety of the blood, as NACO elaborates. 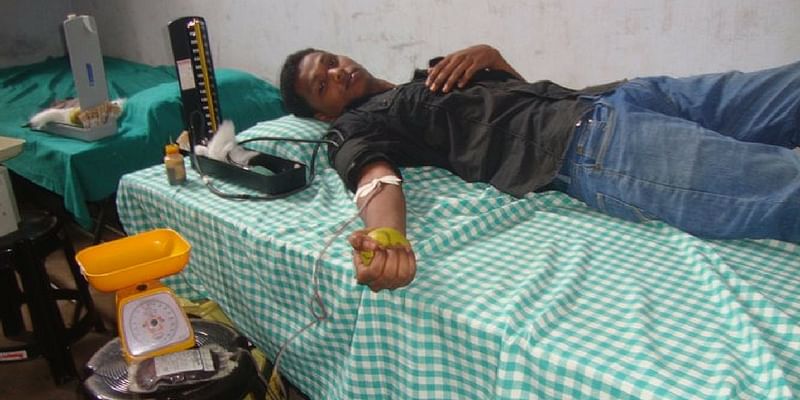 Because replacement donors are compelled to donate blood for emergencies, lying about medical histories is not uncommon; if they are not eligible to donate blood, then the patient might not receive blood. This makes a replacement donor as unsafe as a professional donor (someone who donates for money; now illegal). As found in replicated studies, the positivity rate of viral infections like Hepatitis B and HIV, and bacterial infections like Syphilis are higher in replacement blood donations.

One might then question—why has it not been made illegal? A knotted policy that is slowly unravelling India has roughly 900 blood banks controlled by the government, 362 run by NGOs, 684 associated with private hospitals, and 500 owned by private charity organisations. Until recently, most private or hospital-owned blood banks were not permitted to organise blood donation camps; and the path of procuring the licence to organise was stringent and murky. So, considering that less than five percent of the population willingly walks into a blood bank to donate annually or bi-annually, blood banks had little access to voluntarily donated blood. Moreover, following a shortage, blood banks weren’t allowed to procure units from other blood banks. Corporate blood banks were, therefore, heavily dependent on replacement blood donations. 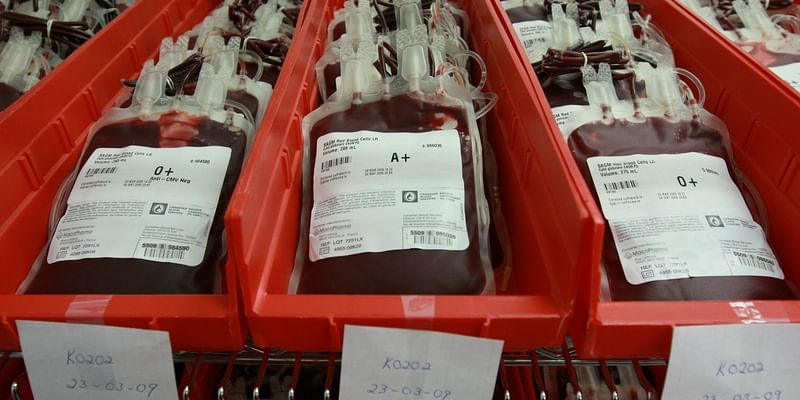 Blood has to be shifted to the blood bank immediately within three to four hours for processing which should be completed within six hours following collection (Image credit: Jacobin Magazine).

But in a landmark move, the Government of India removed these major roadblocks in April this year. All registered blood banks can now organise blood donation camps and inter-blood bank transfer is permitted. So, one would expect a rise in voluntary blood donations and a decrease in the reliance on replacement blood donations. “While the country’s framework for blood donation is moving in the right direction, dependency on replacement blood has not reduced because this exploitation is so deeply inbuilt in the system,” says Rajat Agarwal, a member of Sankalp India Foundation, a youth-led NGO that connects patients with blood banks in times of emergencies, through their helpline. The public eye that doesn’t see all Replacement blood donation has been accepted as the norm. Since any questions raised can delay blood procurement, thereby jeopardising the patient’s life, many yield to this accepted process. “Many donors who are called in are under the impression that they are voluntarily donating blood and walk out pleased that they just helped someone in need,” explains Rajat “but they don’t see the fact that families should not be forced to bring donors in the first place.” While the National Blood Transfusion Council clearly states that families must not be expected or coerced to find donors, there is no room for penalising corporate blood banks that do so. “We don’t force the families,” says Dr Nanda Kishore, medical officer at Ramaiah Hospital, Bengaluru. “It’s optional. We recommend and encourage them to bring their relatives to donate.” Rajat, however, insists that underlying this encouragement is an emotional tether that patients are held under. “No one ever admits that they ask for replacement. But families under immense pressure are always arm-twisted into finding donors.” 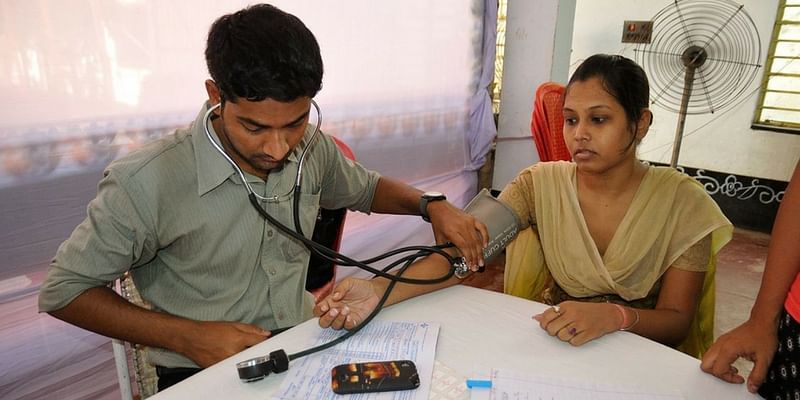 The government is encouraging blood banks to conduct blood camps simply because of its potential to keep stocks full (Image credit: Biswarup Ganguly)

Substantiating this is Nikhil KD’s experience—“My friend needed blood and although the hospital had units, they asked for ‘fresh’ blood from a donor. We had no choice.” Some blood banks refuse to accept units from other banks despite the flexibility for inter-blood bank transfer, with the reasoning that they may not be safe. Rajat reveals that Sankalp receives 60-70 calls every day from Bengaluru alone, from people desperately looking for blood. Even Thalassemia patients, who like Ranganath’s mother require regular transfusions, are burdened with the responsibility of finding donors. Why voluntary blood collection is still dormant Dr Girish, medical officer at Narayana Hrudayalaya Multispeciality Hospital conducts 15-20 blood donation camps per month. While this caters to 70 percent of the hospital’s blood requirement, he says every blood bank’s aim must be to reach 100 percent voluntary blood collection. So, what is stopping every blood bank from conducting them? Conducting a blood camp, as he explains, requires proper planning, resources, and infrastructure:

We need blood mobile vans, recliners, cots, chairs, bags to collect the blood in, a team of doctors and eight to 10 technicians. Pre-camp visits are necessary to ensure that the collection area is clean, safe, and well-ventilated. We need to acquire permission from higher authorities of the venue (like IT offices) and conduct motivation and awareness talks to all donating members.

Post collection, blood has to be shifted to the blood bank immediately within three to four hours for processing which should be completed within six hours following collection. 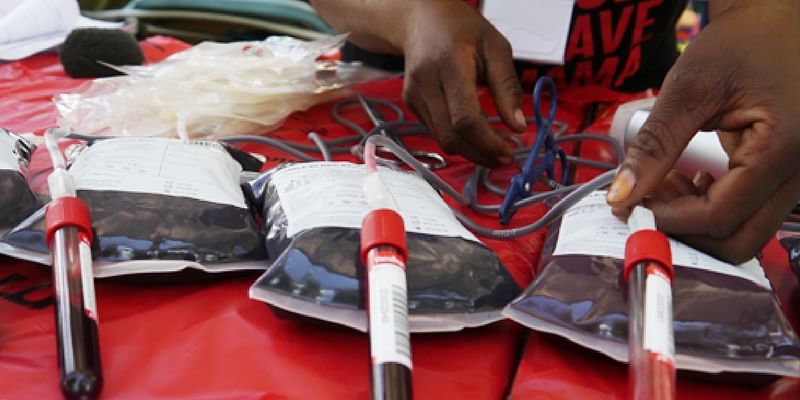 “The difficult part is finding offices to conduct these camps,” says Dr Girish, “Some prefer only government institutions as there’s distrust in private organisations, and they expect quality checks at every step. It takes time to convince them,” he says. Moreover, the camps can only be conducted according to the convenience of the donating team/offices. Considering this long drawn out process of organising blood camps, and cost savings that come from not organising one, one can guess why replacement blood donations could be more convenient for blood banks. Some teaching hospitals have developed their own system of donation; with thousands of students on call, they are off the hook as they “don’t force families to bring donors,” but instead call on their students for replacement. “No voluntary blood camps are organised because we get enough from students whenever we need,” says Dr Nanda Kishore from MS Ramaiah which satisfies its blood requirement through 900 such donors annually. The government is encouraging blood banks to conduct blood camps simply because of its potential to keep stocks full. “The fact that even during summer shortage period, we’re easily tiding through with enough blood is testimony to the contribution of the truly voluntary blood donors,” says Rajat who says that all big hospitals must run camps every third day in order to make a 100 percent shift to voluntary blood collection. Sankalp runs camps every day during the summer to ensure that Bengaluru doesn’t run out of blood. The way forward “Blood banks should not ask for replacement anymore, now that the rules have been amended for their benefit. It’s their responsibility to make sure their stocks are full,” says Dr Shobini Rajan, Director of NBTC. To prevent blood banks from burdening a patient’s family, the centre is also encouraging them to maintain a list of registered and regular donors who can be recalled during an emergency; especially for rare blood types. While NBTC is doing much to encourage the shift towards 100 percent voluntary blood collection, the nudge is possibly too gentle. Moreover, with no official complaints raised by the public, corporate blood banks have no incentive to walk away from replacement blood for good. 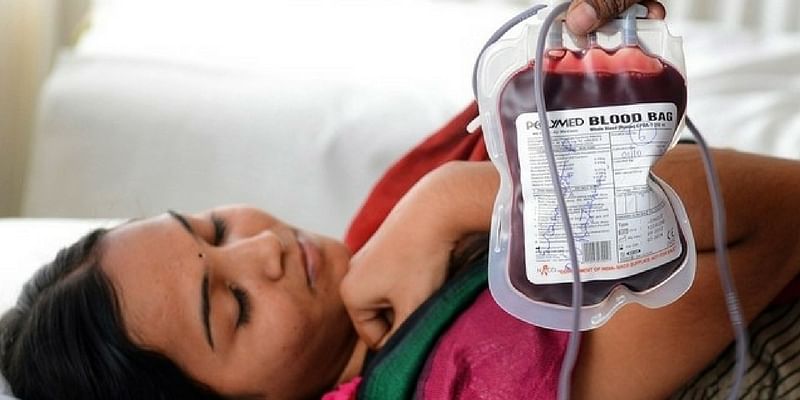 For things to change, people should donate voluntarily more often and question when they are asked to bring donors (Image credit: The National

“Grievances can be filed at the PM’s portal,” Centralised Public Grievance Redress and Monitoring System (CPGRAMS), “which collates grievances from multiple sources and forwards them to the state government, nodal officer, or blood bank concerned,” says Dr Shobini. To raise awareness about and to do away with Replacement blood donation, Sankalp has started a petition addressing the Ministry of Health and Family Welfare. “For things to change, people should donate voluntarily more often and question when they are asked to bring donors,” urges Rajat, and insists that public perception along with government regulation and implementation of laws is the only solution to this ‘bloody’ problem.

Link
We were denied blood until we got donors: the dark side of blood donation no on…
Sankalp Unit
Emergency Wing