Share You Feelings on 60th year of our Independence 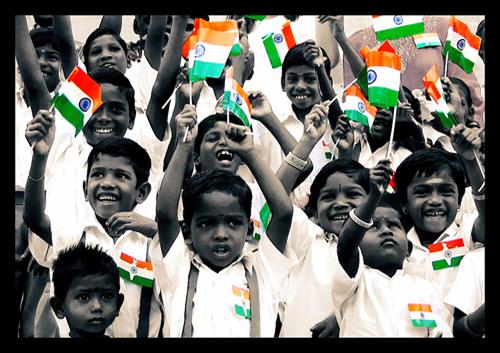 August 15, the national Independence Day, is one of the few days in one calendar year, when we Indians cherish our strength- "unity in diversity". The hoisting of the Indian National Flag, the tricolour, standing tall, bids the day "BEGIN". But one thing is sad- today it's just a formality to hoist the tricolour. The country is no more a child, and has turned sixty this year, but most of us are ignorant about the significance of the triplet- saffron, white and green. Probably the cost of black colour dye has gone down markedly in this year's annual budget, and hence in some tricolours in the city of Bangalore the Ashoka Chakra was not in navy blue. This is termed as tampering of the National Flag, and it is our fundamental duty to stop these instances of unwanted creativity, and help maintain our tricolour's high standards. (flag code source: http://mha.gov.in/nationalflag2002.htm)

Well, that was a general view, but now let me share the relevance of Independence Day in the lives of people back in Guwahati, my hometown. Well, yes! It's a holiday there too! It's just that â€˜they' term the day as bandh. They are a terrorist group, named ULFA, an acronym for "United Liberation Front of Assam". They have just one demand- an independent nation, Assam, which they would prefer renaming to â€˜Axom' (/akhom/) later.

While the entire nation, India, awaits the glorious celebration of its national Independence Day, the state of nature, Assam, gets bombarded heartlessly. The state of the mighty Brahmaputra becomes a hub for terrorist activities, while the fear of death shows in the eyes of the common man; their only â€˜misdeed'- they are proud Indians. You never know, maybe there is a bomb in your car, waiting for you to start your engine!! Apartments collapse like a pack of cards, lives are lost and no one is exempted from this panic. This affects the state badly. The economy of the state goes down and who suffers? The common man. Why are men looted? Why are women harassed? Why are children kidnapped? Just one answer- they are Indians. Assam finds its existence under a question mark. And the scenario exists till August 15. So what meaning or relevance will a man there assign to August 15? They wait for August 16 because they believe that only then will they lead their â€˜independent' lives- what irony!!

This forum helped me share the scenario in Assam, for I think most of you are unaware of it all. And for a fresh fact, know this- as you are reading this article, some people there are putting their feet up and sipping a cup of tea, while others are at funerals!! Personally, I believe that youth empowerment is the only tool that can help us out of this situation. I still pray that this problem gets eradicated from society soon, and some time later, when I go back to Guwahati, I hope I get to feel some fresh air, free of the fragrance of RDX.