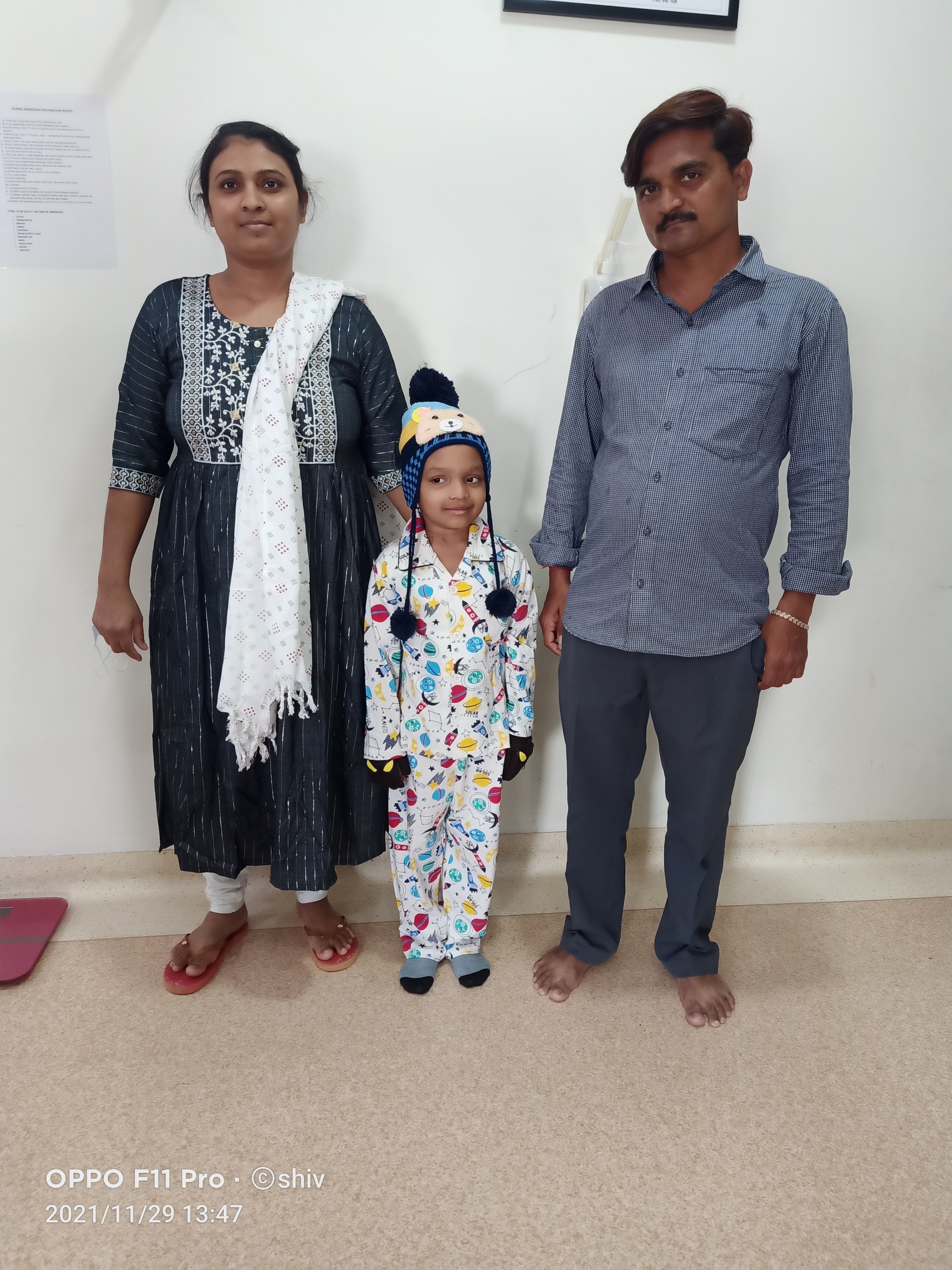 The transplant team at the Sankalp-CIMS Ahmedabad centre remember the days when little Ankit would come to the pre transplant outpatient clinics and with all the excitement in the world ask when would he be chosen to undergo a Bone Marrow Transplant.  His language would not be very fluent and he often would end up jumbling up words. The innocent young boy would not understand much when his parents would be counseled about the risks and benefits of transplant. All he wanted was to come in for his BMT. He dreamt of a life without blood transfusions and all problems that he finds himself in right now. Now, in the time after his transplant, 7 year old Ankit Haresh Gujariya, fully understands the risks of not complying with the post transplant recommendations laid down by the team.

Ankit’s ancestors hail from a small village of Talala, Gir in Gujarat. His parents, Haresh and Usha Gujariya, moved to Surat after they were married. Surat is the Diamond City of India. His father started working in one of the many diamond factories and within a few years they had 2 boys - Dhaval and Ankit. They worked harder all year round and on Diwali each year they went back to their ancestral village to spend more time with their extended family.

In one such family get together about four years ago, one day Ankit fell down and lost consciousness. The village did not have a great health infrastructure. On some basic evaluation, it looked clear that he did not have enough hemoglobin. Infact his Hb that day was 3.5 g/dL which is very low. The parents were shocked. On the insistence of the local healthcare physician, he was immediately given a blood transfusion. On further evaluation done at Surat, the family learnt that Ankit was a thalassemia major. This news came as a big jolt to the family, especially when they understood that it would need care all life.

The family however made a firm resolve that they would leave no stone unturned to look for a cure. Ankit received supportive care including blood transfusions, chelating agents at Surat. As a matter of coincidence, a team from Sankalp was scheduled to visit Surat in order to offer HLA typing to families in need. Ankit’s family registered themselves. As fate would have it, Ankit did find a suitable match within the family. He had a full HLA match with his older brother Dhaval. The family saw a glimmer of hope and were determined to give it their best shot.

When they happened to meet the team at the Sankalp CIMS Transplant centre at Ahmedabad in January 2021 and learn about the process and the cost, they knew that this would be tough. They feared, like everyone else, if the pandemic would cause any roadblocks. However, their resolve was strong and finally in NOvember 2021 Ankit underwent Bone Marrow Transplant. The first month immediately after discharge was not very easy as he had to be readmitted twice with some complications - it meant that the pain of the prick, medications etc continued for some more time. He has been stable and off the hospital for 4 weeks since then, coming to the outpatient clinics for follow up.

Ankit however does not seem to be too bothered. While he has shown courage to bear all the difficulties, he seems to be dreaming about the next thing that he needs to do. As he visits the outpatient clinics, he asks with all his innocence about the possibilities about him eating mangoes without restrictions as he claims that it is his favorite fruit. He makes us realize that continuing to dream is important.